Actually, it's in your face. If someone is called Snow White and everything about her is immaculate, pure and innocent, you must ask yourself what it is that she is hiding. I am not saying that everyone who boasts these characteristics is evil, but let's take a thorough look at Snow White. Who is she? Why does she have to leave the castle? What is she running away from? Who is she running away from? What has she done?

Disney's Snow White is the mosty boring heroine, even compared to later Disney princesses like Cinderella or Jasmin. Snow White was made out of soft and round pencil strokes and her movements were based on an actual dancer named Marge Champion who later also modeled for the characters of the Blue Fairy in Pinoccchio and one of the dancing hippos in Fantasia. (Marge Champion can later be seen in real life as a dancer in several MGM-musicals of the 50s). Her voice belonged to a young Italian singer called Adriana Caselotti who was kept on a very tight leach by Disney, in fact her career after Snow White was reduced to nil.
Disney's Snow White is a very controled character, a young girl who seems perfectly at ease inside the box (or the cell) that she has been assigned to live in. In fact, she never, not even during the nightmarish flight through the woods, steps out of line. She is the perfect picture of total submission, at her best when she teaches the dwarfs how to clean themselves and behave. And thus, as a character in a cartoon, the place where anyone can become anything, Snow White never transcends the paper doll.

This has always struck me as strange. The real magic behind Disney's Snow White has always seemed to me to be about soemthing else, something unseen, hidden behind all that perfection and smoothness. What about Snow White's guilt, for instance. What has she done? Why does she have to run away?

Well, of course, there is the Stepmother, the woman married to Snow White's father who is jealous of Snow White's beauty. The Stepmother apparently had a name in the Disney film: Grimhilde. And she looked evil enough, both before and after the potion called "Sleeping Death" that she so dramatically swallows, clearly inspired by the previous Hollywood versions of Doctor Jekyll and Mr Hyde. Grimhilde turns into an evil old crow in order to trick Snow White to eat the poisonous apple. But will she, Grimhilde, ever be able to retreat back into her beautiful self again? The story never tells, and we will never know as Grimhilde tragically dies in the end. I've always felt a little sorry for her, the ugly old hag, who smiles so mischievously directly at us, as if wanting to make us her accomplice. Remember, she sacrifices her own beauty in order to kill Snow White. So, is the story really about who is the fairest of them all?

In the two new film versions coming out this spring, the evil stepmother is played by Julia Roberts and Charlize Theron, two beautiful actresses in their prime. I am clearly not the only one puzzled by the motives of the "evil" stepmother. But is she really that bad? The Stepmother is a tough part to play, replacing Snow White's dead mother and literally stepping into her shoes, the Queen's shoes. And why doesn't the king ever step forward to save his own daughter? In the Grimm story, and the Disney film, the king is just not there, the third side of the love triangle, the elusive prize that both women are fighting for.

Yes, that is what I am driving at: they are both fighting for the love of the king, Snow White and her stepmother Grimhilde. And why does Snow White has to be banished from the castle? Because of her love for her father, the kind of incestuous love that threatens the new marriage of the king. The king needs to rule and he needs a queen by his side who is strong and forceful, like Grimhilde. But he can't rule as long as he wants to marry his daughter, Snow White.

This incestuous motive in Snow White has been effectively quenched in the Disney version of the tale, and all subsequent versions as well. But like all fairy tales it survives in different stories, and in the French tale of Peau d'Ane (Donkey Skin), it is easy to recognize the story of Snow White in disguise: In the French story, she is a princess who is actually threatened by incest, her father being incapable of loving anyone else after the death of the queen. It will be up to a good fairy mother this time, to save the princess by hiding her underneath a donkey's skin, until the time is right to make her reappear again.

There is a wonderful and strange film version of this story as well, from 1970 by Jacques Démy. I am thinking of the film Peau d'Ane, of course, with the wonderfully perverse Catherine Deneuve in the title role. Delphine Seyrig plays the resourceful good fairy mother, who steers everyone away from catastrophy with both some magic and a good sense of humor. If only Snow White's poor stepmother could have done the same! 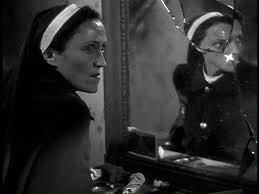 My own cinema studies

I write about the films I love - and the films that I can't forget.

Mikaelas filmblogg
I have written two books on films and hundreds of articles on film, mostly in Swedish but now also in English. I love the way Martin Scorsese made me rediscover American films in the TV-series that he hosted in the 1990:s. A huge inspiration for my own writings on film has been the film historians and critics Robert Phillip Kolker and Anette Kuhn. I like to look in the dark corners of film history, and try to "look with better eyes" as Mary Elizabeth Mastroantonio says to Ed Harris in one of my favorite films, "The Abyss" by James Cameron.